The year 2019 is drawing to a close and it has been a wonderful year for the Engineering Archive! This was another record breaking year in terms of submissions to the server. We ended the year at 411 submission in 2019, which (as it did last year) surpasses the total submission from 2016, 2017, and 2018 combined.

We’ve also seen a continuing trend from last year in that the submission rate has steadily increased as the year has progressed, showing promise for 2020. 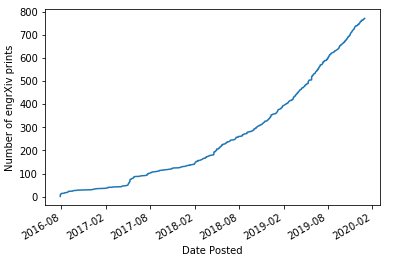 Finally, preprints hosted on engineering archive recently surpassed 300,000 downloads (301,492 downloads at the time of writing to be exact)! We think that this shows the power of open access scholarship. If every one of those downloads represented the purchase of a PDF from a paywalled article, that would be a savings of at least $7,500,000 for the engineering community.

With this growth, Engineering Archive faces the ever present challenge of sustainability of the operation (we don’t intend to ever sell out to a private entity). With that in mind, we took two important steps financial sustainability this year.

2) We launched the Engineering Archive Membership Circle. The Membership Circle creates the opportunity for institutions, libraries, and other organizations to support the sustainability of the server through a $500 annual contribution. Since launching in September, 10 academic libraries (listed below) have signed up to pledge their support. We are so grateful for their early contributions which will help us meet our financial obligations for the coming year. We are still looking for additional members, so please reach out to your home institutions to discuss the Membership Circle with them and encourage them to join. Interested individuals can reach out to info@engrxiv.org to learn more.

The first 10 institutional members of the Engineering Archive Membership Circle:

Again, THANK YOU SO MUCH to those who have already joined us in creating a sustainable future for open access engineering scholarship and to those of you planning to lend your support soon!

Update to our legal status

a 501(c)(3) nonprofit organization for the promotion of open practices in the engineering field. We are working towards increased awareness of open practices as well as providing tools to better enable engineers to be more open. We also provide resources and trainings that allow engineers to develop open workflows and participate more fully in the open dissemination of engineering knowledge.

Under Open Engineering, we now have the ability to accept tax-deductible donations and use other forms of generating income such as Amazon Smile.